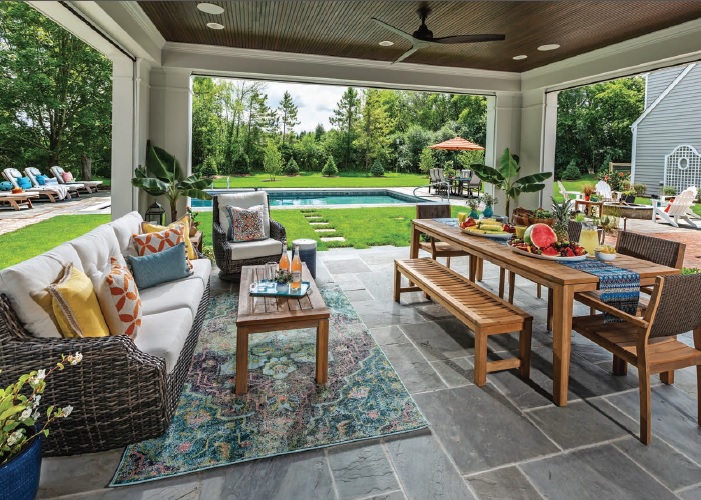 Jim Gleason paints a vivid picture of what he loves about his newly renovated River Hills home. “[There was] a doe walking through the backyard with her fawn who was on wobbly legs, very young,” Gleason says. “She slowed down to let the fawn catch up before moving on. It was a moment.”

That moment, amid an array of natural wonders and combined with recreational elements, anchors the inspiration for the home’s exterior makeover. It was provided by Mequon-based M Design Build, which coordinated a team of subcontractors. The revamp was finished in 2018, not long after an interior transformation was completed.

A single-again retired owner of two medical technology firms, Gleason sought the 5-acre property that reminded him of growing up with six siblings on a large, natural lot in Menomonee Falls. He enlisted professional help to carve out possibilities for relaxation and recreation. The result is an array of new structures, as well as his treasured natural elements.

Outside In
A 22-square-foot lanai attached to the back of the home provides a place to lounge al fresco with just the right amount of shelter. The key, according to Gleason and Mike
Slawnikowski, M Design Build owner and president, is the electronically-controlled roll-down screens that ensure insect-free comfort.

Architect Meg Baniukiewicz of HB Designs LLC in Whitefish Bay designed the lanai with a single-seam metal roof and columns she concepted to give an added dimension to the front door. Baniukiewicz also took cues from the home’s Cape Cod architecture to build an additional two-story, three-garage structure that provides
an additional living room, kitchen and sleeping space.

Interior designer Becky Grinwald of Peabody’s Interiors in Milwaukee infused the garage/living space with a masculine vibe via earthy tones such as gray, blue, taupe,
cream and charcoal, plus wood and metallic finishes and subtle tribal patterns.

Gleason opted for a new swimming pool instead of spending more to repair an existing one and had an outdoor kitchen added to the property. He also has plotted out a space for croquet. Because he enjoys wildlife, landscape accommodation was made for bee keeping, attracting bats, birds and ducks at a shared pond at the far rear of the property.

Landscaping designs complement the indoor-outdoor areas, but do so in a deliberately unfussy manner, says Bob Diel of LandWorks Inc. in Sussex. “This is more of an English cottage garden design and landscape,” Diel says, noting the informal style and the emphasis on blossoming perennial flowers and boxwood that deter the deer that populate the area.

Diel also points out the wood-chip path leading to the pond was created from trees removed from the property.

Rounding out the exterior ambience is an audio/visual system that provides smart-phone-controlled satellite radio and includes more than 10 speakers and subwoofers around the pool. A large, flat-screen television serves the lanai. The system was installed by Dave Klebenow, owner of Oak Creek based Precision Audio Video.

Project Coordination
Terry Perschbacher, production manager at M Design Build, coordinated the multiple subcontractors to maximum effect. Perschbacher says the exterior project’s details required all of the remodeling experience he has accrued since the late 1990s. “There is a lot of negotiating that goes on in this business,” Perschbacher explains. “It’s really about building relationships and being in a position to help each other out about what is needed and within realistic deadlines.”

Those relationships, he says, helped make this project run smoothly. In late June, he was helping coordinate the finishing touches to the grounds after a cool, wet spring. “This is one of the best projects that I have done,” Perschbacher says. “It was just a nice outcome.”